Seasonality and Beer Preferences: Why We Drink What We Do

For us here in the seasonal northern hemisphere, certain foods and drinks appeal more or less at certain times. Salads in summer! Stew in the cold! It’s easy to assume that these preferences are simply “natural” and not question them at all. But some parts of the world sometimes depart or disagree with these “standards” of flavor. For example, a lot of the hot and humid tropics enjoy steamy bowls of soup, even in 100 degree weather. Why is this? And what about seasonality and beer preferences? Do yours change from December to June? Let’s delve a little deeper into what may influence differences in taste throughout the year.

What we tend to eat in the summer in a temperate, seasonal location and what those who live in year-round hot climates isn’t always so different at their roots. The same goes for winter and cool climates, to a point. However, there are many anomalies and outliers that might not make sense to everyone. These aren’t easily explained by the thermostat alone. And if you live in a part of the world where seasons are less prominent, all this puttering about different tastes might bewilder you.

Many American beer drinkers don’t enjoy dark beers in warm weather, but ask Ireland or the Caribbean and they will give you a different answer. Both drink stouts all year long without a second thought. Irish stouts are often very dry and clean in their finish, and Caribbean stouts are usually a touch fruity, slightly sweet and well-carbonated. Other styles of dark beers can be quite refreshing: German altbiers, for example, which are dark ales that have been lagered for a light body and crisp mouthfeel. Schwartzbiers or black lagers are similar, though they utilize a different type of yeast and are typically less bitter. Essentially, the color of the beer means less than the total character of the recipe and process in terms of overall enjoyment. 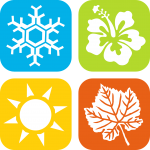 Although we exist in a global economy with mass trade and access to foods from other parts of the world in other climates, we haven’t lost all grasp of seasonality when it comes to flavors. Pumpkin spice season in autumn brings on all types of trendy chaos these days, and for those of us who eat local, garden or forage, spring peas, asparagus or morel mushrooms are seasonal treats. Some of this naturally guides our tastes, and with that, our beer tastes as well. Essentially: seasonality and food preferences impact seasonality and beer preferences too. The hop harvest doesn’t mean we only drink IPAs in September, but many of us will take advantage of fresh hop ales as they are produced (many locally). Beer doesn’t have an endless shelf-life, but it lasts long enough to linger from the end of one season to the next, so we have options. What do you want to drink at a cookout with grilled meats and fresh vegetables? What about at the Thanksgiving table, with potatoes and gravy? Probably something slightly different. Food options can steer our beverage choices.

Ireland loves its stouts, yes, but for us here in the US, we don’t have the same background. Stouts have been a part of our beer drinking culture for a very long time, but they haven’t been given the importance of say, Guinness. Instead, we assume most things should be hop-forward, bigger, bolder, and more intense than any older version that exists. We do however have a history of German-American lager production, and individual places in the country can count somewhat different heritages as far as brewing history goes. But for the most part, we are a young drinking culture with an open mind and a high expectation of variety. Different histories suggest different preferences. Tastes are both very personal and highly culturally-connected.

In conclusion, it’s somewhat obvious why certain beer styles appeal more or less in some temperatures, seasons, and climates. But it’s more complicated. Local history, food products and specific human culture all play a big part. Consider what you’re eating, and why–what drink would you pair with that food? How do you feel in the environment? And most importantly: what do you personally want? There’s no flavor police, thankfully, so enjoy your cellar-temperature barley wine in August or your light lager in January. And mostly: just enjoy.